I’ve been watching non-subbed Suiyoubi Downtown on a daily basis lately, and these guys are hilarious. One of the bits which made me laugh the most was a theory about alcohol in which Kasuga (Audrey), Abareru-kun and Otake (Jungle Pocket) took part in. They made em drink a lot and get drunk, and have them answer trivia questions with impromptu answers (Oogiri). The theory wanted to test if drunken comedians could come up with funnier answers, and it was actually true. I love that show. Why am I writing all of this?
Anyway, this skit is about Otake’s trio, “Jungle Pocket”, along with Ota and Saito, who you may remember from my previous subbed episode, Jungle Pocket Saito’s Shichi-Henge. There’s no much to explain in it, and I couldn’t really find the complete skit (it seems like it’s missing some parts at the beginning). I’d love to translate more Jungle Pocket skits, they’re really good and I like their style.
As usual, keep an eye on my Facebook page so you won’t miss anything!

…And remember, you can support my translation / motivate me to keep on this absurd project by donating on ko-fi or patreon, or even paypal (on my gmail).

Thanks for watching, we’ll catch up soon!

I’ll always be grateful to Amazon’s “Matsumoto Presents: Documental” for introducing me lots of amazing comedians.
And among them, Kawahara Katsumi from the comedy duo “Tenjikunezumi”, who quickly became one of my favorite comedians of all time.
So, here’s a manzai featuring Tenjikunezumi, aka Kawahara (boke, left) and Seshita (tsukkomi, right)!
I really enjoyed this manzai, even though I don’t think that Kawahara really shines in this. I’ve been watching other TV shows featuring him, as well as videos on his youtube channel and Suppoppon radio, a weekly radio show he used to host and believe me when I say he’s brilliant. There are few comedians who manage to cheer me up the way he does, and I think that’s the best thing about comedy.
I’d love to sub more from them and expecially Kawahara, so let me know if you’re interested in it!
We’ll catch up soon with news, so be sure to read em here on facebook! 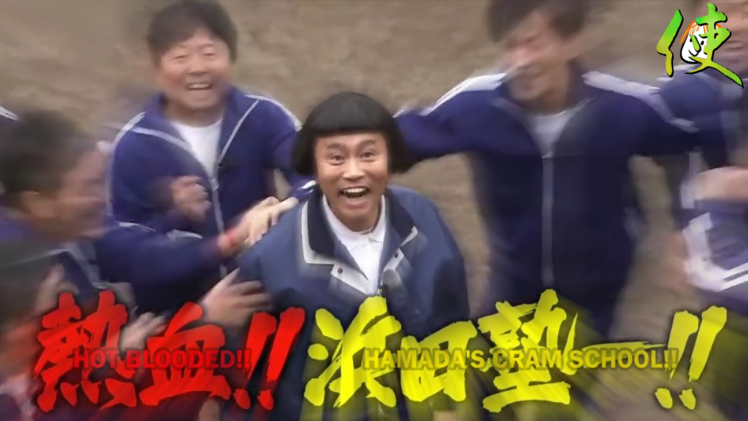 Happy St. Valentine’s day to everyone! …Or not, if you’re one of those “i hate this day” person.
Anyway, doesn’t matter if you’re in a relationship or not, Hamada-sensei will be there for you either way: today’s episode is the legendary first round of the “hot blooded cram school” series!
I’ve seen other episodes from it subbed, but not this one. Maybe I’m just missing it, but it doesn’t look like someone has actually translated this before, and it’s strange to me ‘cause the other ones have been subbed & this particular episode is also featured in the Hamada’s Aging Trial episode which, again, has been subbed before.
Anyway, that’s the episode which started the series; Principal Hamada and Vice Matsumoto will try to teach their students – Cocorico (Tanaka & Endo), Housei , Jicho Kacho (Komoto & Inoue), Shoji and License (Fujiwara & Inomoto) – how not to become weaklings, by having them facing several challenges. If you want to become a president, don’t miss this episode!
There are no notes for this episode – at least I think so. But if something is unclear or such please let me know! It’s always nice to read some feedback.
About future uploads, I can 100% guarantee you there will be a new subbed manzai clip next week (monday or tuesday), and there will be more to come soon too. Also, my next to-be-subbed Gaki no Tsukai episodes have already been decided. One is a long-requested one, the other is a shorter episode from 1992 (I wasn’t even born yet)!

That’s all for today, see you next episode!

I’ve recently hosted a poll on my Facebook Page asking you guys if you’d like to see more short clips / manzai / skits / konto etc. of other famous j-comedy duo / trio / comedians who appeared on Gaki no Tsukai or other related tv shows (such as Wednesday Downtown, Lincoln, Suberanai Hanashi, Freeze, Documental…), and most of you voted yes, so here’s today’s clip from Suberanai Hanashi, featuring a story told by the japanese-american comedian Anthony, from Matenrou (comedy duo along with Ootoni).
I’ve found out about him both on Documental S1 and on several Wednesday Downtown episodes (the first one being the segment in which he and Ootoni tried to build a baseball bat out of ice cream sticks), and I instantly liked him.
On this segment, Anthony talks about his past, expecially his love towards sushi and how things can become difficult for a japanese man who doesn’t look… very japanese.
I love the way he jokes about the awareness of his out-of-canon appearance (for being japanese, I mean), it’s fun to watch and makes him even more likeable than he already is.
I don’t know if the ochi (closing joke) is clear enough, but let me explain it to you real quickly: He knows a lot about japanese sushi, being raised by a japanese sushi chef, and when he goes on a date to Tsukiji Fish Market, one of the most renowed places for sushi, he wants to impress the girl he’s dating by having the chef serve them some sophisticated dishes (such as sayori or kohada – halfbeak or gizzard shard), but the chef, mistaking him for a foreigner who doesn’t know much about sushi, serves them some California Rolls, a U.S.A.-born type of sushi made by western japanese restaurants which surely isn’t traditional at all.
They’re all good to me, though.

I know it’s been a while since last episode, but here we are again, with new Gaki stuff to watch!
First of all, in case you missed it, Team Gaki just released the first part of the new No Laughing Treasure Hunters Batsu Game and is currently working on the remaining parts, be sure to follow them so you always know when new parts will be released (I’m part of their translators team too)!
Now, back to today’s episode, I’ve always been a sucker for the Shichi-Henge series and it’s always a pleasure to work on a yet unsubbed one, that’s why I really enjoyed working on this episode.
I’ve also been watching Matsumoto’s Amazon Prime series “Documental” (I actually watched all the 6 seasons and can’t wait for season 7 to be released) and I’ve absolutely loved it. It also made me discover and like comedians I didn’t even know anything about before, like Saito Shinji from the comedy trio “Jungle Pocket” (his battle against Viking’s Kotohge in season 2 episode 4 is probably one of the most crazily hilarious thing I’ve ever watched).
His comedy style is pretty unusual compared to other professional japanese comedians, and it’s mainly because of his studies as an actor, as he states more than once in Documental.
Either way, I really like his style and I think this episode is really entertaining, I hope you won’t be disappointed!
One last thing before the notes. On my Facebook page (ps: like it) I’m currently having a poll about future uploads. I plan on translating more full-lenght Gaki no Tsukai episodes, but I’d also love to translate more short clips / manzai / contos / skits by other Gaki-related comedians as I did before with Bananaman, Cocorico, License, Kyaeen, Ameagari Kesshitai, Summers etc. (that means I’ll translate clips of – again – Jungle Pocket, Yasei Bakudan, Morisanchuu, Chidori, Robert, Audrey, Pre-gaki Downtown etc.).
It won’t overshadow my Gaki activity, but if you prefer to have more Gaki clips and less other comedians, I’ll stick to that. After all what’s the point of translating stuff if no one’s interested in it? So be sure to show your preference in my poll! There are still few days left to vote.
Veryveryvery last thing, I’ve subbed other Gottsu Ee Kanji clips on my facebook page, you can find em all here.
With that being said, here are today’s episodes TL notes:

– Matsumoto refers to another comedian whose name is Saito, from the comedy duo Trendy Angel. Then, Saito (Shinji) says he’s Saito, mimicking the gesture and way of speaking of the other Saito (from Trendy Angel). That’s what happens at 1:06.
– ZIP! is a NTV show Tanaka is a regular guest in, and “Our Tanaka” refers to Tanaka’s angry character as featured in a episode I’ve previously subbed. Haven’t watched it yet? Go check it out here: Our Tanaka’s Unreasonable Thai-Kicks.
– Chidori is a manzai duo composed by Nobu (tsukkomi) and Daigo (boke). They also appeared on Documental Season 4 (both) and 6 (Daigo only).
– Not sure if Saito is trying to do an impression of a chinese man when he says “atasu”, either way it’s “watashi” (“i”, “me”) with a weird pronunciation. I’ve translated it in different ways.
– Saito’s third skit is about horse racing, as you can see in clips like this one. He’s basically mocking the dopesters who perform last-second gamble with stamps, something they also state is pretty common to see in Oi Racecourse (an horse track in Shinagawa, Tokyo). Also, fun fact: the name of his trio “Jungle Pocket” actually comes from a japanese 1998-born famous racing horse.
– I’m sure you already know, but Chicken Rice is a song written by Matsumoto and performed by Hamada. Soooo heartfelt.

That’s all for now, more news coming up soon on my FB page (and don’t forget about the poll)!
Remember: you can also donate on my ko-fi page to show your support.
I’ve also recently opened a patreon page! Here it is: Shionの使い on Patreon.