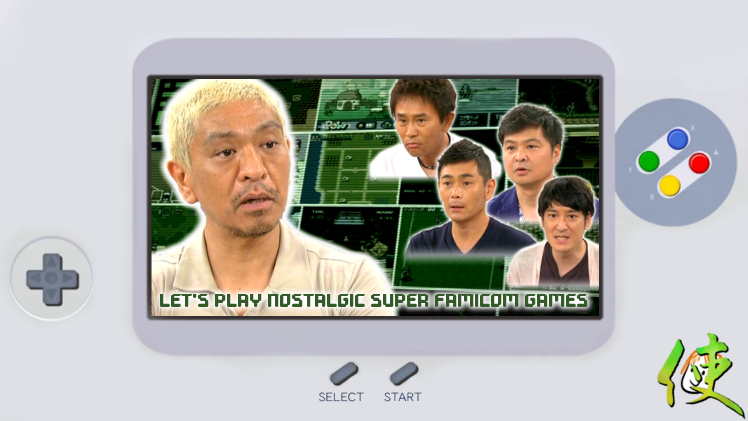 Today’s episode has been typesetted by the incredibly talented Kedomas, and so first things first, huge shoutout to his excellent typeset (which I probably kind of screwed up while encoding)! Also thanks to huh009 for helping me dealing with some encoding issues, I’ve finally fixed that weird aspect ratio problem from last episodes, which I hope won’t occur ever again.
We had the Nostalgic Arcade Games episode few weeks ago, and now it’s time for yet another nostalgic games episode, this time it’s super famicom games!
You can tell Matsumoto and Hosei are genuinely passionate about retrogames, and I really enjoyed the contrast between them and Hamada, Endo and Tanaka who barely even know what the hell they’re doing here. Classic Gaki.

– This episode is part of a longer series, if I’m not wrong this should be the third episode. I haven’t subbed the previous episodes, but you can find them online pretty easily, subbed by other translators / teams.
– At 1:46 Hosei refers to an old anime, First Human Giatrus to compare it with Wagyan Land (or “Wagan”). In this game, you shout a sound, “WA”, which in katakana is represented with the symbol “ワ”, which turns to stone and becomes a platform for few seconds. There’s a similar thing going on in the opening sequence of First HUman Giatrus anime, in which the protagonist shouts “gya” and the sounds – typed in katakana – turns into stone. Here’s a clip.

Thanks again to Kedomas‘s incredible typeset, and to huh009‘s help. I’m so happy to see how fellow gaki fans have been working with me to brought everyone new content, it’s unbelievable. I’m so glad and I’m really thankful to all of you.
I hope there’ll be new subbed content for you soon, in the meanwhile don’t forget to look around this website: you could be missing some gems!

First of all, I wanted to thank to Mattee53 for his typeset. This episode wouldn’t be here if it wasn’t for him, so thank you so much!
Second, I suck so bad at rendering and such, and I know this resolution isn’t the best. Couldn’t do much about it and didn’t bothered tbh, but you can always download any .ass file from any episode in the softsubs page.
That being said, today’s episode is the latest Kiki challenge, and pretty much like last week’s Absolutely Tasty, this feels like a milestone too. I’m so glad I could add this to my (our) collection, and it’s all thanks to great guys like Mattee53 and everyone else who’s been supporting me.
This episode is full of surprises and uncalled-for events. Not gonna spoil anything about it, but I’m gonna leave here few notes as usual.

– On-screen texts haven’t been translated when they show the same things said by the narrator. Also, top right text is this episode’s name as said by Hamada in the beginning, top left is Gaki no Tsukai’s logo. Of course.
– At 7:14, Matsumoto says “It’s not a good thing to lie, I thought Yoshimoto employees learned that last summer”, and he’s referring to the scandal involving Miyasako and other Yoshimoto comedians which happened around July 2019. Here’s an article about it.
– 09:44 untranslated on-screen text: “producers dance – Komurasaki Kozo and Goda Ichiro”. The song playing as they show up is TKGしか愛せない, from Nurarihyon no Mago.
– This episode features lots of japanese cuisine related words, such as “tsuyu” (or “mentsuyu”, a broth base) itself and “somen” (a type noodles), and even more specific recipes. An example of this is 10:54, when Hamada says “tenzaru soba”, which is basically a variety of tsuyu-based chilled noodles, typical of Summer. Another example is the ago-dashi, a variety of soup used often as tsuyu. There’s also a joke (as seen onscreen), when Matsumoto says sorry to Tanaka at 20:44 for looking at him while saying “ago”, a word which also means “chin” (as in Tanaka’s long chin).
– 15:25 – Not sure if it’s clear enough in my subs, they’re getting angry at Endo because he’s wasting time tasting tsuyus which are undoubtedly far from the one he’s supposed to find out. The shiitake (a type of japanese mushroom) flavored one and the soy milk flavored one are the most peculiar between the 10 types, and Endo still chooses to taste them anyway.
– 17:59 – Yoshiyuki Tsubokura is one of the host for the TV show Hirunandesu, in which Endo is a recurring cast member. They often do food reports together.

Again, thanks to Mattee53 for typesetting this episode and for each one of you for the constant feedback and support. Stay tuned on my social media pages for news on new content, hopefully coming soon enough.
Have a nice day and stay safe!