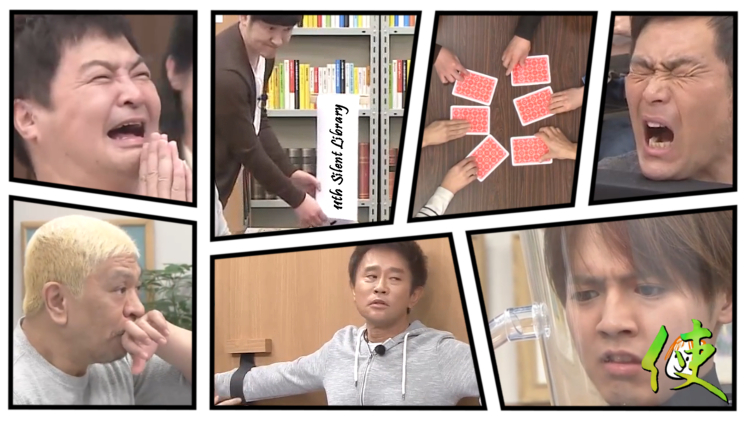 And here we are again, Kedomas did it again. And we’re not even done! Big shoutouts to him as usual, if it wasn’t for him, there would be barely any content on this website (as of lately). Thank you so much!!
Silent Library. Do we really need to explain it? It’s a Gaki classic, the classic between the classics. This is the latest episode, and if I’m not wrong it doesn’t even have a number, being included in a 2-hours Gaki no Tsukai special.
I’ve already subbed the previous episode from it few years ago, and it’s always a pleasure to work on these. One of my favorite series and among the ones which introduced me to Gaki, I simply love it.
On today’s episode our main cast is joined by Ryota Katayose, actor and singer from the boy band Generations from Exile Tribe.
I’ll leave few notes here, and I hope you’re gonna enjoy this episode!

– A kendama is… well, that thing. It’s usually a toy, though (not something to smack people’s foreheads with). It’s a japanese wooden toy shaped like a small hammer with a wired ball tied to it, you play by trying to balance the ball on top (or sides) of it. Here.
– Shabu-shabu is a Japanese hotpot dish of thinly sliced meat and vegetables boiled in water and served with dipping sauces (Wikipedia). It’s usually served raw and stirred by the guests in a cooking pot. The slice of meat you see in this episode is the exact same cut a shabu-shabu piece of meat would have.
– Maybe it’s weird to me (‘cause english isn’t my mother tongue), but let me explain the word “mixer” at 22:30. The japanese word for it is “goukon”, and it’s used for small parties made of mixed groups of boys and girls who usually don’t know each other. They usually play games for couples in said mixers, that’s why they do what they’re doing in this episode. Wow, these notes are useless.

And that’s it for this week, but stay tuned. Me and Kedomas are not done yet! Another episode is going to be online soon, but shh! Keep quiet.